This post is mainly an RDP vs SSH comparison. In detail, what they are, how do they work, and who is safer are introduced.

What are RDP and SSH?

Remote access plays a vital role in work, especially at some IT and DevOps organizations. However, while deciding which authentication protocol to utilize, there are a few viable options to consider. Windows Remote Desktop Protocol (RDP) and Secure Shell (SSH) protocol are two protocols that frequently clash. If you are weighing these two options, here’s a comparison of RDP vs SSH.

RDP is a secure and reliable remote access protocol developed by Microsoft, which can be used as an extension of the Standard Protocol T.120 as part of the ITU (International Telecommunication Union). It offers a Windows Graphical User Interface (GUI) experience for users with or without a technical background.

In addition to Windows, some versions of RDP can be used on Linux, Unix, Mac, iOS, Android, and other platforms. RDC (Remote Desktop Connection), sometimes known as RDP, is one of the RDP clients. To summarize RDP’s fundamental function, it allows users to control any PC remotely via a graphical interface, just as if they were actually using it.

Secure Shell (SSH) is a widely used command-line interface protocol for gaining remote access. As you can see from the definition, unlike RDP, SSH has no graphical user interface and instead relies on command-line interfaces, which are typically controlled by bash. A shell session will be initiated when a secure SSH connection is established, then users can manipulate the server by typing commands on the client.

How do RDP and SSH work?

In this part, let’s figure out how RDP and SSH work.

Remote access is provided using the RDP protocol over a dedicated network channel. The data to be communicated is packaged by an RDP-enabled application or service, and the Microsoft Communications Service directs the data to an RDP channel. The OS then encrypts the RDP data and attaches it to a frame for it to be transferred. 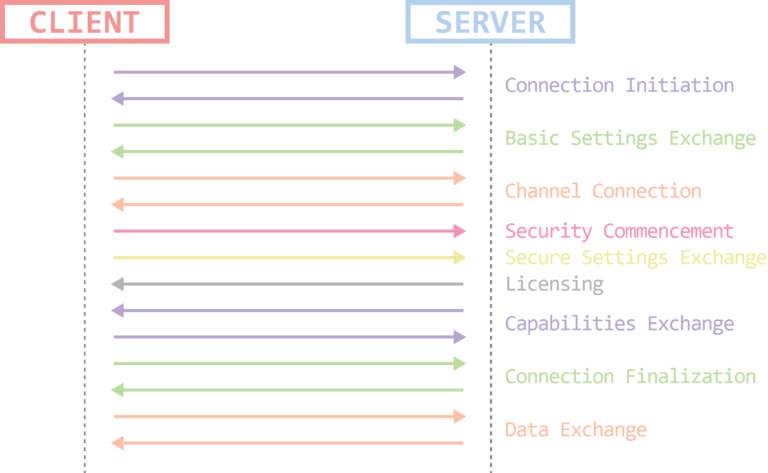 The Terminal Server Device Redirector Driver is made up of sub-components such as the RDP driver, which handles all RDP protocol activity including user interfaces, transfers, encryption, compression, and framing, and packages the protocol to let it be sent across a TCP/IP network.

You’ll need two components to establish an SSH connection: a client and the corresponding server-side component. The client uses the provided remote host information to initiate the connection and if the credentials are verified, establishes the encrypted connection.

The server monitors the network via a dedicated TCP/IT port, waiting for the possible client connection requests. SSH requires the client to provide correct authentication for remote connection. Once the provided credentials are certified, the client may connect and issue SSH commands.

RDP vs SSH for security: Which is safer?

RDP, with proper configuration, is capable of 128-bit RC4 encryption, virtually any port or set of port allocations, and even TLS (Transport Level Security). RDP has proven to be generally bug-free, with only minor faults ever uncovered and no known exploits for those flaws ever carried out successfully.

However, unlike SSH, RDP does not require authentication of endpoints and is vulnerable to attacks that would reroute traffic through a malicious machine to capture data. This makes RDP likely to suffer Man-in-the-middle attacks.

Besides, SSH supports much higher standards of encryption than RDP, specifically support for Blowfish, DES, and IDEA algorithms. The Certificate-based Authentication provides secure recognition before transmission of any (encrypted) data, even passwords for Domain authentication.

RDP vs SSH, how much do you know? After reading this post, you certainly have some idea of RDP and SSH, what they are, how they work, and who is safer. In conclusion, both as remote access tools, RDP is much easier and less technically demanding in setting up and using, while SSH is safer and supports much higher standards of encryption than RDP.

Except for RDP and SSH, there are also other remote access tools for your option. For example, the third-party remote access software AnyViewer. It is secured by a powerful cryptography approach, Elliptic Curve Cryptography (ECC) encryption, which generates security between key pairs for public-key encryption by using the mathematics of elliptic curves. If you are looking for both secure and easy-to-use remote access tools, you can give AnyViewer a try.

You May Also Like
Is RDP Safe Without VPN? [Answered]
RDP VS VPN: Which Is Better?
AnyDesk vs RDP: Which One Is Better?